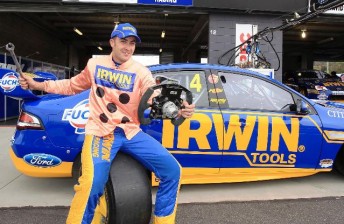 Alex Davison getting into the horse racing spirit

IRWIN Racing driver Alex Davison says he’ll be keeping one eye on the Caufield Racecourse today while he completes final preparations for the Supercheap Auto Bathurst 1000.

Davison has thrown his support behind champion horse Black Caviar, which is aiming to match the winning streak of the legendary Phar Lap in today’s Schillaci Stakes.

The 32-year-old Davison is a former Australian Carrera Cup Champion, and hails from a family of successful racing car drivers, with his father Lex a former Australian Grand Prix winner, and brother Will having previously taken victory in the Bathurst 1000.

According to Alex Davison, his appreciation for sporting success transcends motorsport.

“Black Caviar is an Australian sporting legend, we are all racers and appreciate what it takes to have such success,” said Davison.

“Thirteen on the trot is an amazing effort – fingers crosses she can equal Phar Lap’s record of 14 straight wins.

“If she does it, it’s amazing that next week we will be talking about Black Caviar in the same sentence as Phar Lap, which is phenomenal given Phar Lap’s record.

“I’ve put my money on Black Caviar to win – hopefully she can come through and do it.”

The Schillaci Stakes at Caufield Racecourse will get underway at 1:20pm today.

Having been among the quickest cars in the wet on Thursday, Davison said he was disappointed to miss the Top 10 Shootout.

“We lost our last two laps getting held up by Fabian Coulthard. I was pretty upset about that,” said Davison.