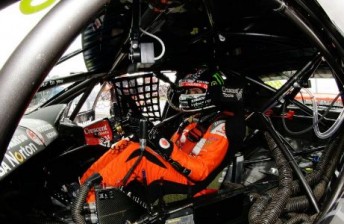 Jamie Whincup aboard his TeamVodafone Commodore

The TeamVodafone driver lost control of the #88 Commodore heading into The Cutting on his final lap in Practice 5 – with the resulting contact with the outside wall resulting in significant damage to the front and rear of the car.

The incident marked the second year in a row that Whincup has crashed in the Friday session, and came after the three-time Bathurst winner witnessed a near miss for Greg Murphy at the top of the Mountain.

“I was following Murph when he had a big moment at Skyline – he dropped a wheel off on the grass and just held onto it before he hit the wall on the left,” said Whincup.

“I was laughing at him the lap before, but the joke was on me (a lap later). I’m probably the Friday Dickhead this year.”

Asked to describe his own mistake, Whincup took full responsibility for the damage.

“Going hard, that’s all it was – I was pushing on and just lost the rear,” he said.

“I was on my third lap on green tyres, they only last two laps so I should have got out of it.

“I lost the rear in The Cutting and hit Larry Perkins’ gate (Perkins crashed there in practice in 2003).

“The guys had to put in a new subframe, and when you bend one of those you know it’s been a big shunt.”

Whincup said that he had full confidence in his repaired car upon heading out for qualifying in the afternoon.

“Unfortunately I’ve had a bit of practice (rebounding from an accident), there’s been a few times when I’ve done some major damage and they’ve fixed it,” he said.

“All our spares aren’t just spare parts, they’ve all been set-up perfectly to go straight in.