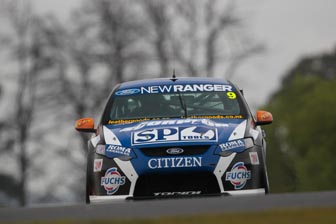 TeamVodafone will have less than three hours in which to repair Jamie Whincup’s TeamVodafone Commodore if it is to compete in qualifying for the Supercheap Auto Bathurst 1000 after the three-time race winner crashed in Practice 5.

Whincup ran wide at the entry to The Cutting on his final lap of the 50 minute session before sliding into the outside wall.

The championship leader, who also crashed in Practice 5 last year, had been knocked off the top of the time sheets by SP Tools Ford driver Shane van Gisbergen moments prior to the incident.

Having set an early 2:08.97s benchmark, Whincup had spent the entire first half of the session as the fastest man.

Garth Tander went marginally quicker with 2:08.95s at the 20 minute mark, which drew an immediate 2:08.70s response from the Triple Eight Commodore, before another lap saw Whincup lower the time further to 2:08.37s.

With qualifying simulations in full swing, Lee Holdsworth showed his hand (2:08.02s) with 10 minutes remaining, which lasted until Tander popped back into the reckoning by setting a 2:07.78s with less than two minutes left.

Fabian Coulthard’s Bundaberg Commodore emerged largely unscathed from a major spin at the top of the Mountain.

The Walkinshaw Racing entry rotated through 360 degrees after the Kiwi lost control over the back of the McPhillamy Park exit kerb, in an incident that involved relatively minor rear-on contact with the inside wall.

Greg Murphy had managed to catch a similarly wild slide earlier in the session, while James Moffat also tested the limits – spinning his Jim Beam entry at Griffins Bend.

The Jason Bargwanna/Shane Price Commodore did not venture onto the circuit during the 50 minutes as the Jana Living Racing crew completed an engine change.

The Stratco Racing crew also had a difficult session, with lead driver David Reynolds completing just six laps as the team continued to sort the engine problems that stopped the car in Practice 4.

Qualifying for the Supercheap Auto Bathurst 1000 will take place at 14:45 local time.