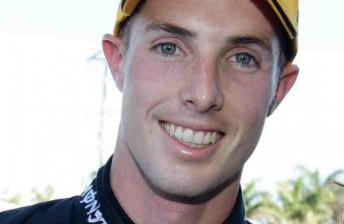 Thompson, who failed to set a representative time during the opening half of the session after running down the Hell Corner escape road on his first flyer, jumped to the top of the sheets after the chequered flag fell – his 2:09.85s undercutting Perkins by less than a tenth of a second.

Ash Walsh and Drew Russell both brought out red flags during the scheduled 30 minutes, with the two drivers emerging unscathed after making heavy contact with the walls in separate incidents at the top of the Mountain.

Less than five minutes of the session had elapsed before Walsh’s Falcon failed to negotiate the right-hander at Reid Park, while Russell slid wide of the racing line across ‘the grate’ at Sulman Park some 10 minutes later – clobbering the outside wall.

Russell’s red flag resulted in less than 10 minutes of green flag running at the end of the session, with Perkins (2:10.07s) knocking Russell (2:10.96s) from the top of the sheets upon the resumption of play.

Perkins then went faster again (2:09.95s) on his next lap, before failing to improve further on his final attempt.

Percat’s session got off to an exciting start, with the Coates Hire Commodore’s driver’s side window popping out heading into The Chase on his out-lap, before the youngster narrowly held onto a major slide through McPhillamy Park on his first flyer.

Race 1 for the Fujitsu V8 Supercars Series will take place at 13:20 local time.