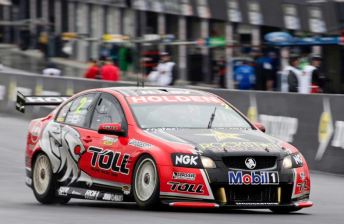 The Toll Holden Racing Team Commodore driver displaced TeamVodafone’s Jamie Whincup from the top of the order by seting a 2:07.66s lap will less than two minutes remaining.

Ford Performance Racing’s Mark Winterbottom slotted himself between the Holden drivers with a 2:07.72s effort immediately after Tander completed his lap.

Winterbottom then went fastest to the end of Sector 2 on his following circuit, but could do no better than 2:07.77s after a lock-up at The Chase.

Whincup’s best time was set with more than 10 minutes remaining, as the championship leader proved unable to extract more speed from his Commodore upon returning to the track for the final eight minutes.

Third place still marked an impressive recovery for the #88 team after Whincup crashed the car in Practice 5, merely three hours prior to the commencement of qualifying.

Kelly Racing was the late surprise of the session, with David Reynolds and Greg Murphy jumping into the top five after the chequered flag fell.

Reynolds was the only driver able to join Tander, Winterbottom and Whincup in the 2:07s bracket – a remarkable effort after the Stratco Commodore required an engine change following issues in Practice 4 and 5.

Van Gisbergen’s threat for pole evaporated with a mistake on the entry to The Dipper on his final lap, moments before Jason Bargwanna crashed heavily at the same point of the circuit.

The performances of Reynolds and Murphy were in stark contrast to that of the sister Jack Daniel’s Racing entries, with Rick and Todd Kelly ending the 40 minutes 16th and 19th respectively.

Jason Bright was also surprisingly off the pace in 18th, while Steven Johnson was an equally disappointing 24th.