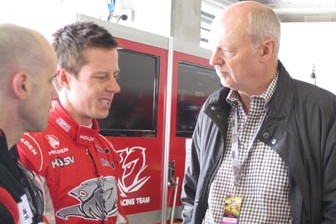 Hallam will assume the role of managing director of Walkinshaw Racing in January next year, overseeing both the Toll Holden Racing Team and the Bundaberg Racing Team.

Hallam is currently Executive Vice President of Competition for Michael Waltrip Racing in NASCAR, and prior to that was Head of Race Operations for McLaren Racing.

The Brit is in Australia to get a taste of V8 Supercars racing before officially starting his role next year.

Speedcafe.com spoke to Hallam just after he arrived at Mount Panorama and said he is in awe of the circuit.

“I’m pleased to be here at Bathurst. Who wouldn’t be?” Hallam told Speedcafe.com. “Everything you’ve seen on TV, read and heard about it, it is one of the most known races world-wide.

“There’s a big presence from the US here too, with SPEED showing it live in the States.”

Hallam accepted the role at Walkinshaw Racing after former CEO Craig Wilson left his post in May this year.

He says that he is looking forward to the challenge of returning the Toll Holden Racing Team and Walkinshaw Racing as a whole to the top of V8 Supercars ranks.

“The goal of anyone running a racing team is to win,” he said.

“I don’t know how we’re going to do that yet. I’m still learning the team, learning the people. I’m meeting a lot of people for the first time this weekend. I’m also taking in the atmosphere of V8 Supercars racing.”

Hallam said that it was difficult to refuse the offer to move to Australia and manage Australia’s most successful racing organisation.

“These opportunities don’t crop up very often,” he said.

“I was working in NASCAR, as I’m sure you know, but you may not know that my wife is originally from Melbourne. That wasn’t the absolute reason for me moving, but once I started talking to the guys from HRT, I knew the offer was going to be hard to turn down. I’m very fortunate.”

Hallam says that he is working on his exit from Michael Waltrip Racing, and when his commitments are up in December, he will begin moving his life to Australia.