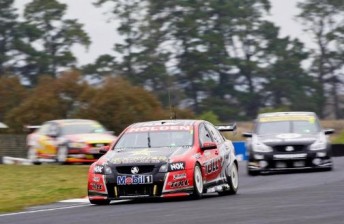 The 2011 Supercheap Auto Bathurst 1000 field has had its first taste of slick tyres in this morning’s co-driver only Practice 4 session.

The Toll Holden Racing team’s Cameron McConville put in two flyers at the conclusion of the session, first undercutting previous pace-setter Steve Richards by 0.37s with a 2:10.13s, before moving the marker down to 2:09.88s after the chequered flag fell.

Mark Skaife also knocked off the Ford Performance Racing Falcon driver in the dying moments, with his 2:10.45s effort good enough for second.

Originally scheduled to last 45 minutes, the session was extended by six minutes following a red flag period for a stranded Tim Blanchard.

“Tim just had a little oil drama and decided to pull off, it’s nothing major,” said the car’s regular driver David Reynolds.

The red flag set up a frantic final nine minutes, with the fastest time to that point, a 2:12.78s set by Andrew Thompson, quickly eclipsed by David Brabham (2:11.98s) and Thompson again (2:10.77s) before Richards and eventually McConville took control.

The session had started with several cars on wet tyres, while others, including Richard Lyons, Ritter, Thompson, Allan Simonsen, Daniel Gaunt, Michael Patrizi, Blanchard and Jack Perkins, did not venture out until slicks were required.