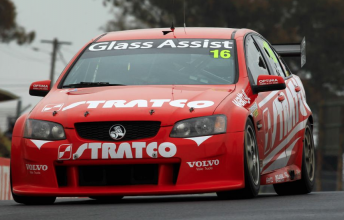 David Reynolds has expressed his joy at scoring his first top 10 shootout spot at Bathurst.

After suffering from engine dramas in today’s second practice session, the Stratco Racing had minimal dry laps. With his race engine bolted into the car a session earlier than planned, the team turned around its day late, making a late set-up tweak to his Commodore to take provisional fourth place.

While his future in the Kelly Racing organisation is unsure, Reynolds was over the moon with the result.

“That was basically my first flying lap up until that point.

“I almost cried. When they told me I was P4 after that last lap, I was so excited, I was screaming yelling, going off inside my little car!”

Reynolds, who will be partnered by Tim Blanchard in the #16 entry, praised the team for nailing the rebuild of the car and its set-up.

“The team basically rebuilt the car after Practice 5. New engine, all new engineering stuff, we just made it out on time, and it produced a bloody good car,” Reynolds said.

“It was border line whether I got out or not. I had two minutes and 40 seconds to make it around from here. I had to push pretty hard on the out lap, and I did. I pushed even harder on my flying lap and I came up P4.

“I was a little bit soft into the last corner. I reckon i could have been third or second. There was still a little bit left in it.

“My new engineer and I work really well together. He came up with a really positive change in that last run on a new set of tyres. It was awesome. It was fantastic.”

CLICK HERE for a full report and results from today’s provisional qualifying session.