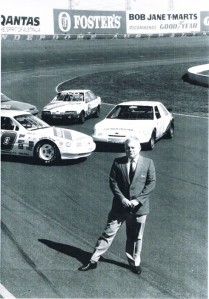 Bob Jane is one of the greats of Australian motor sport.

Having won the Armstrong 500 at Phillip Island in 1961 and 1962, Jane then won the very first endurance race at Mt Panorama in 1963 and then backed it up the following year.

Jane has been involved in the automotive industry his whole life. He started selling tyres in the early 1960s with South Yarra Car Sales and eventually created Bob Jane T-Marts – the country’s most successful automotive franchise. At its peak Jane was selling over a million tyres per year.

“So I became a car dealer and a mechanic and cars became my life.”

Racing was of interest to Jane early on, he was a champion bicycle rider in the 50s, holding many state records before graduating to four wheels and engines in 1957.

Jane’s first race was at Fisherman’s Bend in Melbourne.

“If you cast your mind back to the 50’s, the only race track in Melbourne was Fisherman’s Bend, which was the government airstrip behind General Motors,” said Jane.

“But that was okay because it was before my racing really existed in the way that you know it today.”

While Jane is known as a touring car legend, he also raced in the open wheeler Tasman Series.

“I raced open wheelers when I lived at home but it was mainly touring cars,” said Jane. “In Tasmania I raced a Jaguar down at Longford and won the touring car event down there. That car won me many, many races; in-fact there is a stamp of the Jaguar.

“This was in the very early days of motor sport.”

While Jane enjoyed a lot of success, winning the 1961 and 1962 ‘500s’ at Phillip Island, he also won the very first endurance round at Mt Panorama.

“It went for over eight and a half hours and we had opposition from the Goeghegan brothers, who had the same car from the Ford Motor Company.

“Harry (Firth) and I won fairly easily at the end of the day, but it was a bloody hard race I tell you.”

While racing fans remember the performance at Bathurst almost 50 years ago, Jane has fond memories of his Australian titles.

“They were pretty good for me, in those days there were some bloody good drivers.

“Then of course I got the Camaro in 1971 and 1972 and won the Touring Car Championship again.

“It’s a bit hard to say what your best drive is. I say to my kids, I’ve got three kids, I love them all no more one than the other.”

Having driven against some of the biggest names in Australian motor sport, Jane lists Ian ‘Pete’ Geoghegan as the best he ever drove against.

“Well, he was a fearless driver,” said Jane.

“His cars, in our opinion, were never set up in a conventional way.

“I’ve got pictures of his various cars, in particular the Mustang, and the wheels were going everywhere, but it didn’t matter he was still quick, he was hard to beat.”

As well as being a driver, Jane was also known as the owner of Calder Park Raceway, which he used to stage the Australian Grand Prix.

“We were looking for an event to run and we didn’t know what was going to happen in Formula One.

“The Grand Prix was scheduled for Calder Park in October 1980 and prior to that Alan Jones had won the World Championship in the Williams car and his father Stan was my best mate.

“Alan used to work for me selling cars before he went to England, so I rang him and said why don’t you get your ass out here and run in the Grand Prix in Australia. “We got six of the Formula One guys; in those days we paid good money.

“We ran the event and it was a good event, our track was a mile and a half long and we had fun, we ran that for five years.

“Then it became the World Championship, we arranged that with the Premier of South Australia. Adelaide ran it for 11 years before they lost it to Melbourne; it was probably the best Grand Prix in the world for the first five of those years.”

After the initial development of Calder Park, Jane expanded the facility to include the Thunderdome.

“In the process of talking with Bernie Ecclestone, Bernie said that we couldn’t run the Grand Prix at our race track, it needed government support,” said Jane.

“Knowing the Grand Prix was not going to be staged at Calder Park after 1984, I went to see Bill France in 1982 and got a deal to run NASCAR in Australia.

“According to some people currently writing a book on NASCAR in Australia, they say it was the most important thing to ever happen in Australia including the Grand Prix – that was their opinion not mine.”

Jane still has happy memories of the first NASCAR races.

“It was fantastic for us, because we also built cars, we built 20 NASCAR cars in Australia, taking several over to Charlotte in South Carolina,” said Jane.

“Allan Grice was the first non-American to ever qualify in a NASCAR race in about 1990, that was a pretty important thing for us.

“Dick Johnson went also, so it was pretty big stuff in America at the time.”

Looking back at his illustrious career, Jane is most proud of his work on Formula One and NASCAR. 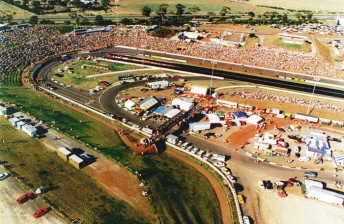 “The Formula 1 race as a national event was very important to us and the fact that it became a World Championship event, I’m very proud of that. That was about 27 years ago.”

As someone that is long retired from all types of racing, Jane keeps an eye on V8 Supercars.

“I don’t want to be critical of it but frankly I find it boring,” said Jane.

“I read that Tony Cochrane is now allowing drivers to yell and scream and shake their fists at each other (to make headlines and increase crowds).

“If you follow the history of motor sport in Australia, have a look at Oran Park in 1971 and 1972, with Jane versus (Allan) Moffat.

“The track was closed on both years by 11am on the Sunday. Police would close the roads, close the track, there was about seventy or eighty thousand people there. You don’t see that sort of crowd now.

“Let’s make the racing close and exciting, that will grab people’s attention.”

As for Bathurst, most people are putting their money on Craig Lowndes/Mark Skaife successive wins. Not Bob Jane. “To be honest with you, and I don’t mean this negatively, but I don’t give a rat’s arse,” said Jane.

“I’m going to go there as a guest of the Bathurst council and I’m going to watch it like a lot of people who watch it on television.

“I don’t have an opinion, I don’t really care. I’ve lost interest in it, but it’s still worth seeing of course.”

These days, Jane still has his tyre empire, but has expanded into the digital world.

“We sell tyres on the net, car tyres, truck tyres and a lot of equipment on the net. That’s the new business.”

In addition to this Jane is working towards 2012, when his beloved Calder Park Raceway celebrates its 50th anniversary.

Bob Jane interviewed on channel 7 in 2007