FEATURE: Where the Bathurst dreams began

FEATURE: Where the Bathurst dreams began Michael Caruso in action during his karting days

Long before they were stars in the V8 Supercar Championship, the majority of the 58 drivers in this weekend’s Supercheap Auto Bathurst 1000 were vying for victories on go-kart circuits.

In the early nineties the likes of James Courtney, Michael Caruso and Mark Winterbottom were ‘banging sidepods’ on karting circuits across New South Wales watched by family and friends. Now they’re ‘banging doors’ with millions of people watching across the world.

When the trio filled the podium at the inaugural Sydney Telstra 500, James Courtney said “Today could have been the Combined District Kart Club Championship in 1992.”

“We all grew up karting together from when we were seven at places like Lithgow, Oran Park and Wollongong.

“Back then we were banging side pods and now we’re banging car doors.”

For Garth Tander, a dual Bathurst 1000 winner, he believes karting is the only place for youngsters to start their motor racing career.

“I learnt all of my racecraft when I was racing karts, there is no question about that,” said Tander.

“You don’t learn how to race in a Formula Ford or a Touring Car, all of your knowledge comes from the purest form of the sport – karting.” 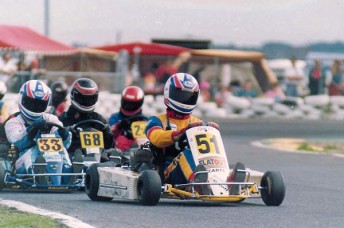 Dual V8 Supercar Champion Jamie Whincup has indicated that the interstate rivalry was something that he thrived on during his karting career.

“It was a massive, massive battle between us Victorians and the Sydneysiders. We’d come up here (to New South Wales) and try to knock these blokes off and be very proud that we could take the trophy away from them,” said Whincup.

While the state battles have somewhat disappeared in the V8 Supercar Championship and been replaced by manufacturer and team honours, the heritage of drivers in this weekend’s race makes for interesting reading.

Victorians dominate the entry list with the Garden State boasting no less that 24 starters in the 2011 ‘Great Race’. Six of this group spent much of their formative years as a part of the Go-Kart Club of Victoria (Tood Road) with the Eastern Lions Kart Club, located at Puckapunyal, also appearing as one of the major breeding ground for future stars. Hailing from this club is Whincup and his regular Team Vodafone team-mate Craig Lowndes along with Cameron McConville and the Davison brothers, Alex and Will. One of the country’s longest standing clubs, the Oakleigh Go-Kart Racing Club, has five starters in this weekend’s race.

In New South Wales, the two dominant Clubs on the list of the state’s 13 drivers is the Combined Districts Kart Club located at Lithgow and the Sydney Kart Racing Club, which has been without a track since the closure of Oran Park Raceway. Tony D'Alberto started his career as a member of the Go-Kart Club of Victoria. Pic: Simon Adams