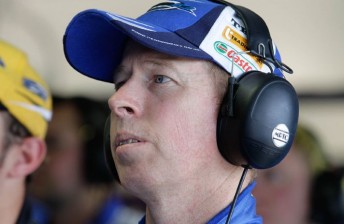 Steven Richards has led the way for Ford Performance Racing in the first co-driver only practice session at the Supercheap Auto Bathurst 1000.

Intermittent showers tormented the drivers during Practice 2, and ensured Richards’ time would not be beaten.

David Besnard ended the session 0.44s adrift in second, while David Russell was third, ahead of Mark Skaife and Greg Ritter.

Russell – the only driver in the top five to have also completed laps in Practice 1 – had set the early Practice 2 pace in the Jack Daniel’s Racing Commodore, stopping the clocks at 2:30.89s and 2:28.76s on his opening two flyers.

Besnard’s 2:28.33s saw the Jim Beam Racing Falcon fastest as it headed for the pitlane after 15 minutes, before Richards went faster as a shower approached.