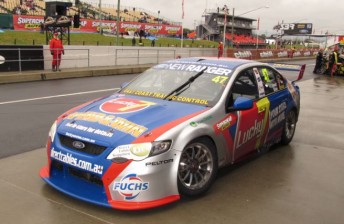 Lucky 7 Racing’s Tim Slade has emerged on top after a late flurry of fast times in Practice 1 for the Supercheap Auto Bathurst 1000.

With the track drying rapidly in the closing minutes, 13 of the top 14 drivers recorded their fastest lap of the session on their final tour.

The 29-car field remained on wet tyres throughout the 50 minutes, with the benchmark time slowly being whittled down from the 2:36s bracket as the session progressed. Slade takes in the running order after the session

All teams sent their lead drivers out to complete the opening stanza of the session, which saw Fabian Coulthard (Bundaberg Racing) and Alex Davison (IRWIN Racing) trade the top spot.

Jamie Whincup (TeamVodafone) had also been on the pace early, before handing the wheel to co-driver Andrew Thompson after a wild spin at Murrays Corner.

The Toll HRT employed a similar strategy with car #2, trading Garth Tander for Nick Percat as the halfway mark approached.

Assisted by the improving conditions, Percat soon eclipsed Tander’s best effort before bunkering the factory Commodore in the sand at Hell Corner, bringing out the session’s only red flag.

Several teams took the red flag as an opportunity to install their co-drivers, with Craig Baird, David Russell, Dean Canto, Andrew Jones, Jack Perkins, Nathan Pretty, Cameron Waters and McConville among those to step aboard their respective mounts.

Mark Winterbottom (Orrcon Steel FPR) jumped to the top of the order soon after the green flags flew with 13 minutes to go – his 2:27.16s a testament to the improving conditions.

Moffat, Tander (now back in the Toll HRT entry) and van Gisbergen (who had joined Tony D’Alberto in completing an installation lap only during the opening 20 minutes) all took turns at the top of the sheets in the final 10 minutes, before Slade trumped them all after the chequered flag had fallen.