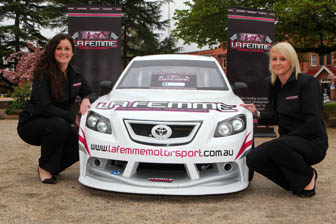 A brand-new, all-female motorsport team has been launched in Bathurst today.

The La Femme Academy of Motorsport has been established to provide a pathway and opportunities for young women aged 16-24 to succeed in the traditionally male-dominated motor racing industry.

Both courses run for a total of 18 months, each consisting of nine learning units that incorporate both practical and theoretical components aimed at professional development in either race driving or a variety of team operational roles.

Students are required to attend every class to complete all nine units of professional development and training to graduate from the Academy.

Both courses provide extensive on-track training with the La Femme Motorsport Team, which will make its competitive debut in the 2012 Aussie Racing Car series.

Each Driver Development student will be given the opportunity to race the official La Femme Motorsport-owned Aussie Racing Car in selected rounds of the series.

At the same time, each Team Development student will receive hands-on trackside experience working as integral members of the La Femme Motorsport crew as they travel to events across Australia.

See below for Speedcafe.com’s exclusive video from the launch of La Femme.