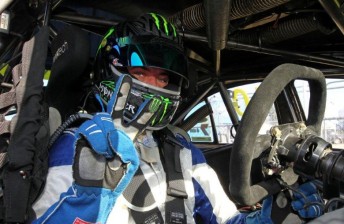 Mostert set the benchmark from the very opening minutes of the session, with an early 2:35.60s lap ensuring the Simpro backed Falcon was 4.5s clear at the top of the time sheets as the halfway mark approached.

With track conditions improving slightly as the session unfolded, Percat cut the gap to 1.3s with 10 minutes remaining, before Mostert’s 2:33.57s lap again moved the teenager out of reach. Perkins split the pair with a 2:33.52s effort inside the final five minutes, before a red flag ended the session two minutes early.

Two red flags bookended the session, with a spill for Steve Voight causing significant damage to his ex-Paul Weel Racing Commodore VE, which is being run for the first time this weekend by Matt Stone Racing.

Practice 2 for the Fujitsu V8 Supercars will take place at 16:10 local time.