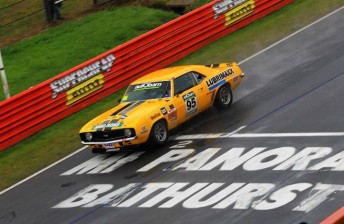 Andrew Miedecke has taken pole position for the Touring Car Masters at Bathurst, despite facing parity restrictions after being reclassified as a seeded driver prior to the event.

The weekend ended early for Formula Ford racer Elliot Barbour, with his yet to be raced V8-powered Chrysler Charger withdrawn from the event due to persistent teething issues.

The Touring Car Masters will not be seen on track tomorrow, with Race 1 set to kick off at 8:45 on Saturday morning.