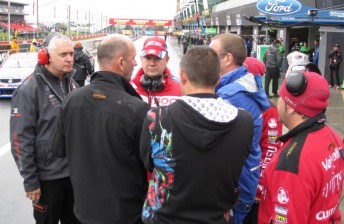 Cars were on their out-lap when the red flag was called, with fog on top of Mount Panorama the official reason for the stoppage.

Several team owners then met with V8 Supercars officials while cars were lined up in pitlane ready to recommence proceedings, before the entire session was abandoned.

It has emerged that two different batches of wet Dunlop tyres are present at the track this weekend, leading to concerns that some teams will gain an advantage.

Paddock speculation is suggesting that the newer of the two batches, designated by the letters PV, could prove faster than those from the batch marked ZD, which was produced in January.

A meeting will take place at the circuit tonight to decide the make-up of the wet weather tyre allocation for the remainder of the weekend.

Restricting teams to just five sets of wet tyres –  three of the PV and two of the ZD – is one option currently being floated.

The original supplementary regulations for the meeting stated that an unlimited amount of wet tyres could be used, with teams able to purchase the rubber from Dunlop at the circuit.

“At the moment, there’ll be an allocation of two sets of ZD tyres, built in January, and then there’s three sets of PV tyres which were built recently for use in the race,” team owner and commission member Ross Stone told Speedcafe.com immediately after the session was cancelled.

“That’s all OK, but some people have bought brand-new tyres here, so we need to work out how that all fits in.”