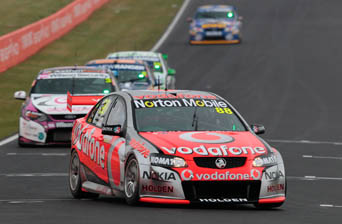 TeamVodafone's Jamie Whincup leads the field in one of the earlier, drier sessions

Dunlop has denied concerns that the presence of two separate batches of wet weather tyres at Bathurst this weekend will disadvantage any of the V8 Supercars teams.

Practice 3 for Sunday’s Supercheap Auto Bathurst 1000 was cancelled this afternoon amid concern that the existence of recently produced wet tyres (marked PV) alongside a supply of tyres produced in January (marked ZD) had left an uneven playing field.

V8 Supercars officials will meet with team owners tonight to find a solution to the issue, with early suggestions indicating that the situation could be solved by stipulating the exact number of sets from each batch that cars will be able to take into the remainder of the weekend.

Dunlop’s V8 Supercars operations manager Kevin Fitzsimons told Speedcafe.com however that drivers will not be able to tell the difference between the PVs and the ZDs. “PV is the latest batch and it’s what we have the most of so that’s what we’ll supply everyone,” Fitzsimons told Speedcafe.com.

“At the end of the day, there’s five months build difference (between the two batches), which is not an eternity. When it’s wet, you’re not going to know the difference.”

Fitzsimons also said that while an overlap period between two tyre batches is not a new phenomenon, the demand for wet tyres this weekend has been unprecedented.

“Hopefully the weather clears up and we won’t have an issue (with supply).”

The controversy over the two different tyre batches comes just three weeks after a new batch of dry weather tyres was introduced at Phillip Island.

While all new slick tyres allocated for the L&H 500 weekend were from the newer batch, several teams reported that the new tyres were significantly different in character from the previous stock that was run in practice.