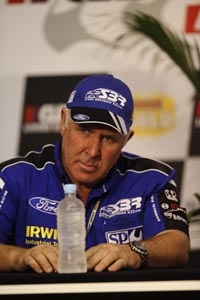 Ross Stone has signed a new two-year deal with James Rosenberg to continue to run his #47 Racing Entitlements Contract alongside Stone’s two entries – #4 and #9.

On top of that, Rosenberg’s driver Tim Slade has also secured a new two-year deal to drive the #47 SBR-prepared Falcon FG.

Speedcafe.com’s Grant Rowley spoke to Stone about securing the three-car line-up, as well as potentially expanding his operation beyond three cars in the future.

SPEEDCAFE: Your new two-year deal with James Rosenberg and Tim Slade gives you a some great stability. It means you’ll have at least three cars until at least the end of 2013 …

ROSS STONE: It gets us well and truly into the new Car of the Future, but eventually, I think the best model will be the four-car teams for economies of scale.

We are really comfortable working with James and Tim. Their deals tie in and we’re very pleased with it.

SPEEDCAFE: By the time this new deal expires, Tim will have been with you for four years. You’ve obviously got some pretty high expectations for him.

STONE: We have. We think he is really capable of going a long way in the business. Time will tell, but he is setting himself up well. He had a fantastic Queensland Raceway with three podium finishes, yet a disappointing Phillip Island.

We’ve done our home work alright, and hopefully we come out of Bathurst this weekend with some decent results.

SPEEDCAFE: Lets talk a little bit about expanding your team beyond three cars. Why is a four-car team potentially better than what you have at the moment?

STONE: I think the four-car model is the most cost-effective way of doing V8 Supercars. When you crunch the numbers, it makes sense.

Perth, for example, wouldn’t have been a cost-effective exercise for us this year if we didn’t have the Fujitsu Series car to take with us too. Logistically, three cars isn’t right.

It might be two years, or even four years away, but it is where we want to be.

SPEEDCAFE: Is it a matter of getting to the four-car team as soon as possible, or only when it’s right?

STONE: We’ve got a big commitment going with our three cars at the moment and I wouldn’t do anything at all to interrupt the plans we have for them.

I’d much rather sit it out and wait, even if it was sitting on a platter. If it was going to impact on what we’re doing at the moment, I wouldn’t do it.

SPEEDCAFE: If you take on four cars, would you still like to do a Fujitsu V8 Series program?

STONE: Jimmy and I really enjoy the Fujitsu Series. I think we’d try and keep doing that. I have a young guy like Scott McLaughlin, but I have no where for him to go. He probably needs another year in the Fujitsu Series …

Bringing young guys on, working with them, seeing them come right, and seeing them develop is really interesting and satisfying.

SPEEDCAFE: Do you expect to see more Main Series teams grow to four cars in the future?

STONE: I still think that is two or four years away. What will happen is that some of the teams in this pit road will run in the Fujitsu Series. That’s where I see some significant growth.