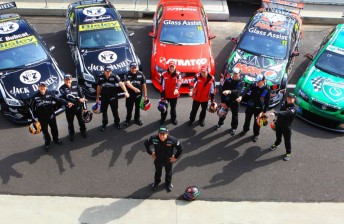 Kelly Racing will access whether its reality television program, the Shannons Supercar Showdown, will return for a second season in 2012 following this weekend’s Supercheap Auto Bathurst 1000.

Produced by local company WTFN, the inaugural series saw 10 contestants compete for the right to drive alongside Grant Denyer in a fifth Kelly Racing entry at Bathurst.

Speaking to Speedcafe.com at Bathurst, Kelly Racing’s general manager for marketing and sponsorship, Nick Ryan, revealed that a second season of the show is being considered.

“It could happen again next year,” Ryan told Speedcafe.com of the show’s future.

“It has been a massive undertaking for the team, taking on a five car program for Bathurst, but also the program of filming for almost three months to take the show from go-to-whoa. “From that perspective, it was a big learning curve, but it did achieve our key objective for fostering new talent and giving a pathway for new guys and girls to get into the category.

“Because of the success of the program, we’d like to think we can do it again, but we’ll come together with the production guys following this weekend, access the whole program and potential looking towards doing it in 2012.”

Ryan stressed that running an extra car in this weekend’s race will not detract from its regular program, which consists of the Rick Kelly/Owen Kelly and Todd Kelly/David Russell Jack Daniel’s Racing cars, the David Reynolds/Tim Blanchard Stratco Racing car and the Greg Murphy/Alan Simonsen Pepsi Max Crew entry.

Led by respected manager Dean Orr, the Denyer/Waters Commdore is being run at Bathurst by a combination of recently hired full-time Kelly Racing staff and several employed just for this weekend.

“It was certainly more work, but when we evaluated the program from day dot, we needed to ensure it wasn’t going to be a distraction from our objectives with our four cars,” said Ryan.

“That’s a commitment we had to all of our commercial partners and the fans. We set about implementing a team that could manage the program and not cause a distraction.”