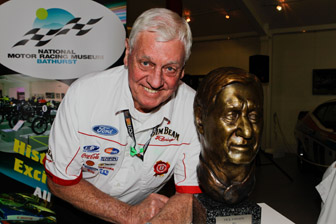 Dick Johnson with his statue at Bathurst today

Johnson, winner of the 1981, 1989 and 1994 ‘Great Races’ accepted the accolade alongside the unveiling of a statue in his honour.

The statue of Johnson will live in the National Motor Racing Museum at Bathurst, which is located at on the outside of Murrays Corner.

The Queensland hero says that he has been humbled by the award, but praised those who helped him achieve all that he wanted in the sport.

“It’s not about my ugly head. It should have the names of the guys of the team who helped me get there,” Johnson told Speedcafe.com.

“They are the ones who deserve to be there.

“I never went motor racing to end up with a profile. I went there because I enjoyed doing it, and to have enough the success and to be recognised for what I did is an absolute honour.”

Managing director of the National Motor Racing Museum Tim Pike says that Johnson is deserving of the award.

“We’re very chuffed that he accepted the invitation and has been inducted into Hall of Champions,” Pike told Speedcafe.com.

“We don’t do it every year. We only award this every so often. He’s had an enduring legacy on Mount Panorama. The smashes make you almost as famous as the wins. He had the rock and the tree, and you add to that his public adulation. He’s a legend and deserves this award.”