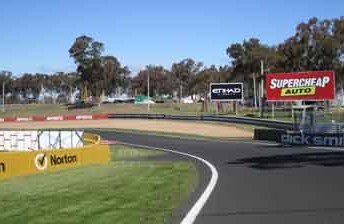 Norton 360, Dick Smith and Etihad branding can be seen McPhillamy Park this year

There’s no mistaking any images from Mount Panorama, but while the track layout has barely altered in 50 years, there are some slight changes that should be documented.

Each year, the corners at Mount Panorama remain the same, but the advertising from turn to turn change slightly.

There are a number of new advertisements scattering the track, including the introduction of Etihad Airways and Speed TV.

For those with a keen eye, you’ll find Etihad signs at McPhillamy Park, as well as through the final part of The Esses.

Speed signs are located at the end of the front straight, as well as in The Esses. The Speed channel has brought its own American-based television commentary crew to Bathurst this year. You won’t get to hear the tones of Leigh Diffey, Calvin Fish or Darrell Waltrip’s voices on Australia’s Speed channel, but you will see some signs of their presence around the track.

Norton 360 and Dick Smith have also taken a large presence at the top of the mountain, while ‘The Chase’ does not have a naming-rights sponsor this year, instead plastered with many of V8 Supercars’ regular partners.

Speedcafe.com took a pre-meeting lap around the 6.213km circuit to give you an inside view of what you’ll see at this weekend’s Supercheap Auto Bathurst 1000.