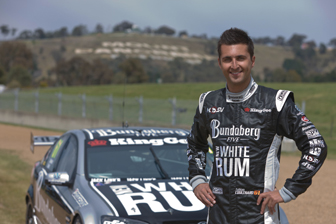 Fabian Coulthard’s future with the Walkinshaw Racing organisation remains up in the air.

The 28-year-old New Zealander has a contract to drive with the famous WR organisation in 2012, but his deal could see him act as a co-driver, rather than a full-time steerer.

Current Paul Morris Motorsport driver Russell Ingall is being tipped as the driver most likely to replace Coulthard in the Walkinshaw Racing seat, backed by current sponsor Supercheap Auto.

Coulthard says that his first options is to honour his current deal.

“At the moment, I still have a contract with WR for 2012, and I want to stay here,” Coulthard told Speedcafe.com.

“It’s a great organisation, they have a great history, multiple Bathurst winners, multiple championship winners, why would you go anywhere else?”

Would he accept just a co-driver-only role?

“We’ll cross that bridge when we come to it …” Coulthard said.

Coulthard has driven for Walkinshaw Racing since 2010 and has represented Bundaberg Rum since he began with the team.

At Bathurst today, Coulthard unveiled a new look Bundberg Racing colour scheme, representing Bundy’s new White Rum brand. The new colours will remain on the car at the Armor All Gold Coast 600 before reverting to its regular colour scheme.

Coulthard unveiled his new-look Commodore VE at ‘The Chase’ today – the place where he endured his spectacular roll over last year.

See below for video with Coulthard, talking about his massive shunt, the new colours and his future in V8 Supercars …