Pressure on Spencer ahead of SoK Finale

Pressure on Spencer ahead of SoK Finale 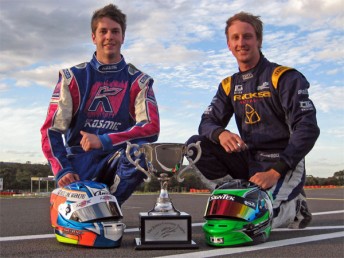 Victorian Jake Spencer has admitted that the pressure is on him entering the Finale of this year’s CIK Stars of Karting Series presented by Castrol EDGE at Newcastle next weekend.

The JAM Racing driver started this year with the aim of securing a podium finish in a round and possibly claim a top five championship finish – now he is in with a shot of etching his name in Australian Karting history as the Pro Light (KF1) Champion and winner of the James Courtney trophy.

“The pressure is definitely on me going into the final round, especially after the last round when I lost a heap of ground in the points on Cian due to not finishing the first final,” said Spencer, who holds a slender six point lead at the top of the standings.

“I can’t explain how much it would mean to me to get my name on the James Courtney trophy, when you look at the names who have won this championship before there’s a lot of great names there.”

After a strong showing in the most recent round, also held at Newcastle, Fothergill is slightly confident of overcoming Spencer to snare his second consecutive Pro Light (KF1) Title.  If successful, he will become only the second driver in series history to complete the feat – the other being Barclay Holden (2003/2004).

“I had a bit of bad luck at the start of the year, which made life a bit harder than it should have been and it’s given me a real challenge to chase down the title,” said Fothergill.

“Hats off to Jake, he’s done a fantastic job all year and been very consistent but hopefully I can get away with the win and make it two in a row.”

While the leading duo will dice it out for the overall title, the race for third place is very tight with Grant Smith, Matthew Waters, Adam Hughes and George Geranis set to battle it out.