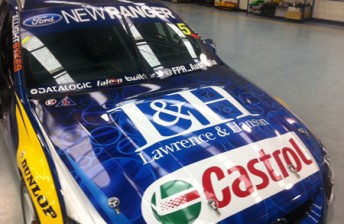 The Orrcon Steel Ford Performance Racing team will campaign a special livery change at Mount Panorama this weekend to celebrates the 10th anniversary in V8 Supercars.

Orrcon Steel has updated the livery of the #5 FPR Falcon to include a special steel theming, which will also carry through to the Armor All Gold Coast 600.

Managing Director of Orrcon Steel Leon Andrewartha says he’ll walk through the gates of Mount Panorama feeling proud of his company’s achievements over the last 10 years in the sport.

“Orrcon Steel is extremely proud of our long running association with V8 Supercars and Ford Performance Racing, in particular we are delighted with the calibre of drivers we’ve had as our brand ambassadors,” said Andrewartha.

“From the beginning with Mark Larkham and Jason Bargwanna, through to today with Mark Winterbottom, Steven Richards, Will Davison and Luke Youlden – Orrcon Steel feels very strongly that our decade long involvement in motorsport has been critical to the development of our brand. It shows Orrcon Steel’s commitment to see it through.” 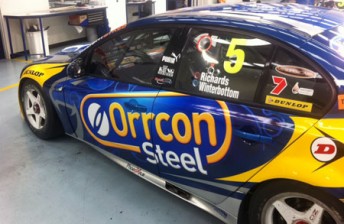 The side of the Orrcon Steel FPR Falcon

“Being 10 years since Orrcon Steel joined V8 Supercars, I would love to give them a Bathurst win,” said Winterbottom. “Orrcon Steel has been an integral component of the cars that I’ve competed with – both in sponsor terms and in terms of the physical componentry on the car.

“We’re launching this awesome updated colour scheme to celebrate the 10th anniversary of Orrcon Steel’s involvement in the sport and the new name on the car. We had a load of creative entries come through and it was very hard to pick a standout – but I just had to go with Blue Steel – it encapsulates exactly what we’re about.

“It’s a big weekend for us, anything can happen in this race as Steve and I have proven in the past and we just have to hang tough and be right there at the end to see it through.”

Additionally, Orrcon Steel has confirmed the name of Winterbottom’s FPR Falcon. A winning fan has choose the name ‘Blue Steel’. The winning entries have won tickets to Bathurst, a meet and greet with Winterbottom and Steven Richards and the opportunity to join the Orrcon Steel FPR Falcon on the grid prior to the start of the race. The name will be carried on the racecar for the 1000km endurance classic.

The second FPR Falcon, driven by Will Davison and Luke Youlden, has also had a small livery change. The Tradingpost.com.au has updated its logo which among other things now includes the ‘.com.au’ suffix after the name of the Australian-owned classifieds website.