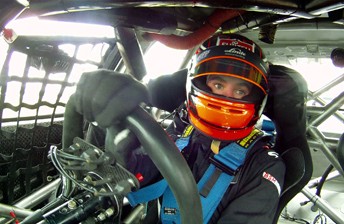 Cameron Waters is looking to impress his new team bosses at Mount Panorama this weekend, hinting that he’d like to build his V8 Supercars future with the family squad.

Waters has won the right to compete in the Supercheap Auto Bathurst 1000, securing the inaugural Shannons Supercar Showdown and landing the drive alongside Grant Denyer in this weekend’s ‘Great Race.’

At 16-years-old, Waters will also become the youngest-ever person to make a start in the Bathurst 1000.

Waters says that he wants to have a safe, competitive run at Bathurst to sure up a possible future with the team.

“To be in with Kelly Racing is amazing,” said Waters.

“If I go well, I could be part of the future, but that will depend on how I go in this.”

The Kelly team has long held an ambition to offer a youth driver program, similar to the way the Kelly boys entered the sport through the Holden Young Lions team.

Rick Kelly says that Waters will be watched closely this weekend to see how he handles his Mount Panorama task.

“Todd and I are very excited about the talent that Cam has,” Kelly told Speedcafe.com.

“We’d love to be a part of his future plans, but at the moment, we just want to get him through Bathurst, and we also want to see him win the Australian Formula Ford Championship.

“At such a young age, he has a huge amount of potential, and we don’t want to put too much pressure on him too early.

“We’ve always said that we have wanted to help develop young talent in the sport. We see Cam as being a part of that and we’d like to work with him. At this point, though, we’ll just see how he goes for the rest of this year.”