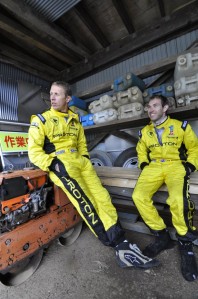 Australia’s Chris Atkinson will now fight for the Asia Pacific Rally Championship with team-mate Alister McRae only for the driver’s title after rival Gaurav Gill had his points from winning the APRC segment of Rally Hokkaido stripped.

The Indian’s Mitsubishi failed post-event scrutineering in Japan this in-turn has guaranteed one of the Proton factory drivers the title for 2011.

With the amended results, the Perth-based Scotsman leads the APRC driver’s category with a seven point advantage over Atkinson. The championship to be decided between the two Proton team mates at the final round, Rally China, in November.

Gill, driving an MRF sponsored Lancer Evolution X, had won the APRC segment of the rally ahead of Japanese team-mate and reigning APRC champion Katsuhiko Taguchi, with McRae in third place.

Upon inspection later in the day stewards from the International Automobile Federation (FIA) disqualified Gill for the technical infringement on his vehicle. This promoted Taguchi APRC round winner and McRae to second place. Atkinson, who led the event, was sidelined midway through the opening leg with engine failure.

The Monaco-based Australian has won three of the five rounds contested in 2011, like in Hokkaido he failed to finish Rally Queensland on the Sunshine Coast due to mechanical issues.