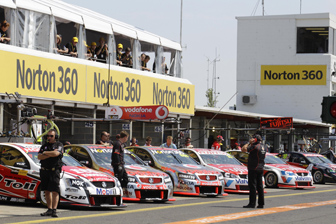 V8 Supercars’ pre-season test and launch looks set to be switched from Eastern Creek to Sandown next year.

The Greater Dandenong Weekly reports today that the outer Melbourne circuit has secured the rights to the popular free-to-public test on February 11.

Like this year’s inaugural test at Eastern Creek, the pre-season hit out will be counted as one of the V8 Supercars team’s six allocated test days.

The news means that the V8 Supercars will hold two events at Sandown – the pre-season test and the return of the Sandown 500, replacing the Phillip Island 500. CLICK HERE for Speedcafe.com’s previous story.

According to the Greater Dandenong Weekly, the council has granted consent to the Melbourne Racing Club to use the circuit for the V8 Supercar launch.