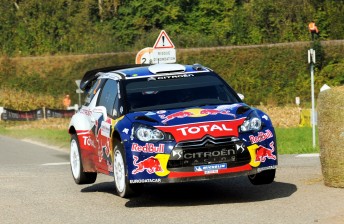 An exclusion and a major time penalty has locked-up the lead in the World Rally Championship points battle following Sebastien Ogier’s victory at the Rallye de France Alsace.

The battle for the 2011 WRC is set to go down to the final round in Great Britain next month after a dramatic conclusion to today left defending seven-time World Champion Sebastien Loeb (Citroen) and Mikko Hirvonen (Ford) tied for the lead, while Ogier sits just three points back.

Ogier won the rally ahead of an impressive drive from Dani Sordo in the Mini, with Petter Solberg originally credited with third place. However, Solberg’s DS3 was found to be four kilograms underweight at the post-event scrutineering and was excluded from the results. This elevated Hirvonen, who prior to the final stage moved ahead of Jari-Matti Latvala when his Ford team-mate took a 2-minute time penalty for deliberately checking into a regroup early.

Ogier made the most of team-mate and championship leader Sebastien Loeb’s Friday exit with engine failure to claim his first victory on home soil.

“It was difficult at the end because there was a lot of pressure after the problem for Seb [Loeb]. It’s very important for the championship but now I must do two good rallies.”

While Ogier shone on his way to his fifth win of 2011, Sordo was the standout in his John Cooper Works WRC making it two podiums from four appearances for the emerging manufacturer.

The Spaniard spent much of Sunday morning trimming Ogier’s outright lead thanks to his decision to use soft compound tyres in the colder conditions. However, when ambient temperatures rose, Ogier’s hard compound rubber had the edge and Sordo settled for a hugely impressive second place.

“Two rallies on tarmac and two podiums is amazing and feels like a victory,” said Sordo.

“It’s an incredible result, very nice and in the end I am very happy.”

Hirvonen, who with one stage remaining was placed fifth on the time sheets, could not believe his fortune to have claimed a podium finish and be on equal footing with Loeb at the head of the points.

“It’s unfortunate to inherit a position due to a rival’s misfortune, but at this stage of the season every point counts,” said Hirvonen.

“We’ll go to the next round in Spain as joint leaders of the championship and with just two rounds remaining; the fight for the title is truly wide open. I aim to be on top form in Spain and an exciting conclusion to the year is in prospect. I can’t wait!”