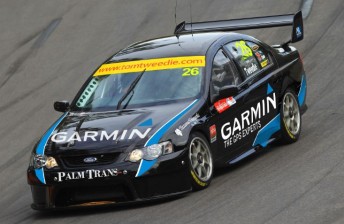 Fujitsu Series driver Tom Tweedie has received a boost prior to his first Bathurst campaign in a V8 Supercar with the signing of major sponsor Garmin.

The GPS navigation specialists will back the 23-year-old Sydneysider’s Matthew White Motorsport prepared Falcon, which sits 11th in the series standings after four rounds.

Tweedie competed at Mount Panorama earlier this year in the Bathurst Motor Festival’s Formula Ford 1600 races, but believes returning in the V8 will be a major challenge.

“I am very proud to be representing a great brand like Garmin who are leaders in their field and it is an enormous vote of confidence in me, the MW Racing Team and the sport that they have now come on board to support me,” said Tweedie of his sponsorship deal.

“Bathurst is the toughest, most demanding circuit of this season so far and the biggest test in my rookie V8 Supercar season.

“I have some experience at the circuit in a Formula Ford at Easter this year which was a big help so I’m really excited about what this weekend holds.

“We want some strong results to lift the Garmin Falcon towards the front of the pack and into the top ten in the championship standings.”

Two 14 lap Fujitsu Series races will be held at Bathurst, with both the Friday and Saturday afternoon affairs set to be shown as part of Channel 7’s extensive broadcast.