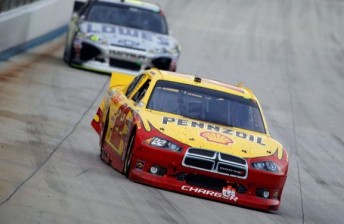 Kurt Busch has moved into title contention after beating Jimmie Johnson to victory in the AAA 400 at Dover.

Busch, whose only prior win this season came on the road course at Sonoma, beat the five-time defending champion on the final two restarts before easing away to victory.

Having endured a difficult run last time out at New Hampshire, the win sees Busch elevated to fourth in the championship standings – just nine points behind Kevin Harvick and Carl Edwards.

Johnson held out Edwards for second in the race, with the Roush Fenway Ford driver appearing a likely victor save for a mid-race pit road penalty.

Race 30 of the 2011 NASCAR Sprint Cup Series will take place at Kansas next weekend.

See below for the AAA 400 race result