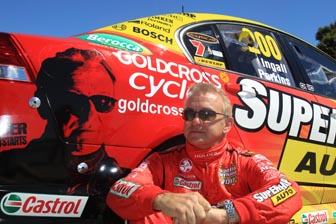 Ingall, who will rack up 200 ATCC/V8 Supercar Championship this weekend at the Supercheap Auto Bathurst 1000, pairs up with Perkins at Bathurst – reuniting the famous Perkins/Ingall combination that won the 1995 and 1997 ‘Great Race.’

Of course, those victories were between Ingall and Jack’s dad Larry, but Perkins Jr has carved his own mark in the sport, currently running fourth in the Fujitsu V8 Supercars Series.

Ingall hopes that a top result at Bathurst will put Perkins in a position to achieve his Main Game ambition.

“Jack deserves a ride in the main game and he’ll get it if we can write our own piece of history this weekend,” Ingall said.

To celebrate Ingall’s 200th start milestone, the #39 Supercheap Auto Commodore will enter under the #200, as well as sport a revised, one-off livery.

“I think it’s the best Supercheap Auto Commodore we’ve had, it’s a great looking car and will definitely stand out at Mount Panorama – right at the front on lap 161,” Ingall said.

“Some say I’ve gone a little soft, so we’ve readdressed that with Dirty Harry-style photos of the Enforcer. There might be some who’ll be aiming for the photos for payback, but good luck to them if they can catch me!”

Perkins is in fact responsible for the look of the Commodore as he is the signwriter at the Paul Morris Motorsport team.

“The car is great, a fantastic tribute to Russell in what hopefully will turn out to be a very special weekend for us and the entire Supercheap Auto Racing team,” Perkins said.

“Being the signwriter here printing off big photos of Russell’s head on our Roland printer then sticking them on the car … we’ve all had a good laugh about it. Hopefully everyone knows when I’m driving the car so they don’t square off with Russell by targeting his photo!”

Practice for this year’s Supercheap Auto Bathurst 1000 kicks off Thursday, with six practice sessions over three days. Qualifying is scheduled for Friday afternoon and the traditional Top 10 Shootout Saturday.