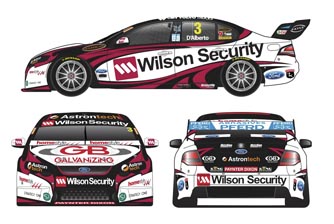 Wilson Security Racing will feature a special pink livery at the Supercheap Auto Bathurst 1000 this weekend.

Both of the team’s cars in the Championship and the Fujitsu V8 Series will compete in the one-off pink colour schemes, supporting the McGrath Foundation.

The team will also change its name for the event – to be known as Wilson Security Team McGrath.

It is the third year that Wilson Security has used its sponsorship of V8 Supercars to display its support for the McGrath Foundation.

D’Alberto, who has recovered from his bout of the chicken pox that he contracted at last month’s L&H 500 Phillip Island, says that the change of look for Bathurst is a great initiative.

“I feel like there’s a little bit of extra pressure to perform at Bathurst, carrying our special pink livery for the McGrath Foundation,” D’Alberto says.

“I’m going to use that pressure and turn it into inspiration and hopefully score a great result.

“The McGrath Foundation is such a terrific charity. They do some great work in our community and they have been very supportive of our Bathurst campaign.”

McGrath Foundation ambassador and director Tracy Bevan says that being involved with a V8 Supercars team at Bathurst is a great was to showcase the foundation’s hard work.

“What better way to get revved up during Breast Cancer Awareness Month than with our friends at Wilson Security?” said Tracy Bevan.

“For the third year running, Team McGrath is taking to the track to give us a unique opportunity to showcase our friendship in the communities in which we work.

“This year’s Bathurst 1000 will be another opportunity for the Foundation to celebrate the support our Bathurst McGrath Beast Care Nurse has provided to the local community, our friendship with Wilson Security and a great Aussie sport.”

This year’s Supercheap Auto Bathurst 1000 starts with practice on Thursday, October 6. Qualifying will follow on Friday, the top 10 shootout on Saturday then the 161-lap race on Sunday, October 9.