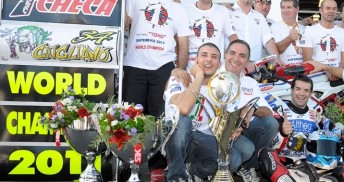 Carlos Checa has wrapped-up his first World Superbike title in emphatic style be sweeping both races at Magny-Cours in France.

Checa (Althea Racing Ducati) won the title with an assured victory in the opening 23-lap race. Once clear of long-time leader Eugene Laverty (Yamaha World Superbike Team), Checa was unopposed and took his 13th race win and raised his points total to an unassailable 442.

His only pre-race title rival, Marco Melandri (Yamaha World Superbike Team), was second after a late charge through to the podium, with Leon Haslam (BMW Motorrad Motorsport) making his German based team happy with a top three finish.

Leon Camier (Aprilia Alitalia) was a close fourth, with Laverty slowing to end up fifth.

Not satisfied with his victory in the opening race of the day, Checa took his 14th win of the season in fine style when he held off late charger Melandri. Third was Laverty, who was only passed in the very late stages by his team-mate Melandri.

Haslam was unable to repeat his podium from race one, as he finished six seconds from the win. Fifth place went to the Effenbert Liberty Ducati of local man Sylvain Guintoli. Ducati also claimed the Manufacturers’ Championship.

Checa enters the final round at Portimao with 467 points while Melandri has 360. Laverty moved up to overall third today with a total of 283.