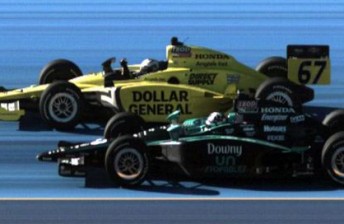 Ed Carpenter won by a nose

Ed Carpenter has taken his maiden IndyCar Series race victory in the Kentucky 300 as Dario Franchitti jumped to a clear lead in the points standings.

While Franchitti lost the race to Carpenter’s Sarah Fisher Racing entry by 0.0098s, the Scot turned an 11 point deficit into an 17 point advantage over title rival Will Power heading into the final race in Las Vegas.

Power led the opening portion of the race, but struck disaster  in the form of Dreyer & Reinbold driver Ana Beatriz at his first pitstop on Lap 49.

Beatriz had been released into the path of the Penske Racing entry, causing significant damage to Power’s car. After several stops for repairs, the Australian eventually finished 19th.

Dixon’s third place was enough for the Kiwi to wrap up the A.J. Foyt Oval Trophy.

Carpenter was not surprisingly stoked after the race, having won for the first time in his 113th start.

“It felt way better than I ever thought it was going to feel,” said Carpenter.

“Dario raced me hard and clean. I knew we had the better car but in the second or third step.

“It was weird race because my visor was falling off in one of the steps and we had all sorts of stuff going on, the team made changes all day to the car … just an awesome day.”

Power meanwhile was philosophical after the race, refusing to be upset by the unfortunate situation.

“They just sent her into me – there’s nothing I could do about that one,” said Power.

“We had the quickest car, an unbelievably fast car, but after that happened it tore a hole in the side pod, we lost 4mph and that was that.

“It was just a fight to hang on to the back of the field, the car was still handling well but it had no speed – there was so much drag it was just impossible.

“That’s racing, we will just come back at Vegas. It is what it is, we can’t do anything about it now.”

Power and Beatriz were not the only drivers to endure pitlane drama. The races of Marco Andretti and Alex Lloyd ended with pitlane contact as the full-course yellow waved for Simona de Silvestro, who had lost control of her HVM Dallara while exiting her pit bay – hitting a KV Racing team member.

JR Hildebrand meanwhile slid through his pit box and ran into his own crew – taking himself out of contention for a top five finish.