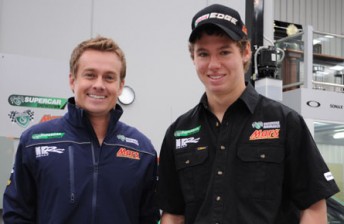 Cameron Waters will make history when he becomes the youngest driver to ever compete at the Supercheap Auto Bathurst 1000 at Mount Panorama.

Waters, 17, will drive alongside Grant Denyer in the #77 Shannons Mars Racing at the classic Mount Panorama event after winning the Shannons Supercar Showdown reality TV series, which has screened on 7mate over the past 11 weeks.

The car will be prepared by Kelly Racing, giving the team five cars to enter in the 1000km race. The #77 entry is a ‘Wild Card’ in the Supercheap Auto Bathurst 1000 field – a one-off addition to the regular 28 car V8 Supercars field.

After starting with 10 young and aspiring racing talents, Waters was the last left standing after winning the final elimination challenge, getting the nod over Englishman Andrew Jordan.

From Mildura, Victoria, Waters is regarded as a young man with a big future in Australian motorsport. After a decorated karting career he was crowned the Rookie of the Year in the 2010 Australian Formula Ford Championship and is this year dominating the 2011 championship.

Waters will break the existing record of current V8 Supercar driver Paul Dumbrell by just seven days next Sunday at Mount Panorama by becoming the youngest driver in the history of The Great Race.

Waters says that he is “happy and excited” to have secured his place on the Bathurst 1000 grid.

“It’s been pretty difficult to get here but I put in the hard yards and made it work so I’m pretty happy and excited to be going to Bathurst.”