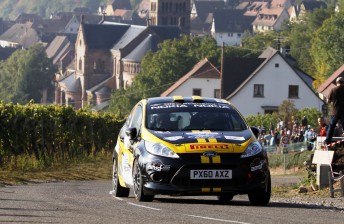 Molly Taylor on her way to fifth

Taylor recovered from sliding off the road late on the opening day to keep her head, while others faltered in what became a survival of the fittest.

“It was quite tricky out there with lots of gravel and very slippery in some points,” said Taylor.

“We managed to get here which is really good.”

“So we put the vice grips on the rubber line. We had no clutch but brakes were working.

“Got to the beginning of stage 16 and it was an uphill start. We couldn’t leave the line within 20 seconds and under the rules we had to pull out of the rally!

Reeves fell from third in the standings to fifth.

Spain’s Yeray Lemes claimed his maiden victory in the WRC Academy Cup after runaway leader Craig Breen (Ireland) slid into a bank one kilometre from the end of the day’s second stage and broke a driveshaft.

Apart from a small gearbox problem, little troubled Lemes who held on to take victory by 42.3s ahead of Alastair Fisher, who celebrated his first podium in the young driver-training category. Jose Suarez made it two Spaniards in the top three when he finished third.

The WRC Academy concludes on Wales Rally GB in mid-November.