V8 Supercars team owner Todd Kelly says that he has no concerns over entering Cameron Waters in the biggest V8 Supercars race of the year – the Supercheap Auto Bathurst 1000.

Waters, 17, will become the youngest-ever starter in The Great Race, eclipsing the previous record held by Paul Dumbrell by seven days.

The only V8 Supercars experience Waters has in during the reality TV series, plus two test days.

Kelly and his younger brother Rick awarded Waters the ride in the Shannons Mars Racing car in the Shannons Supercar Showdown reality TV show today. Todd says that age or inexperience will not be a problem for the talented Victorian. 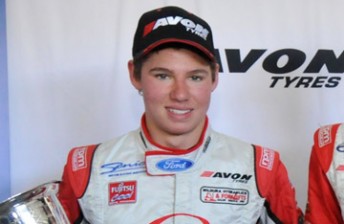 “It could be too young for a lot of young drivers, but we’ve been very, very careful about throwing him in the deep end,” Todd said.

“At the end of the day at some stage you have got to do it. Rick and I had our first Bathurst at a young age. I was a teenager and so was Rick.

“There are 16 and 17 year olds that are very mature and can handle themselves well, and there are some that can’t, and Cam is certainly level headed enough to attack it.”

Kellys says that the way Waters handled the elimination challenge in the Shannons Mars V8 Supercars is enough to leave him with no doubts.

“You could not get more pressure thrown on a race car driver than an elimination challenge for a drive at Bathurst against another very, very established driver and the way he handled that was a good indication of what we’ve got to work with,” he said.

“So he’s been through a hell of a lot so far and hasn’t put a foot wrong so I’m as confident as I can be that he will do a good job up there.

“At the end of the day there might be a slip up. He might get turned around or anything could happen, but that’s the risk that we are prepared to take to give him an opportunity and that’s motorsport.

“We will just see how it shakes out and have our fingers crossed.”