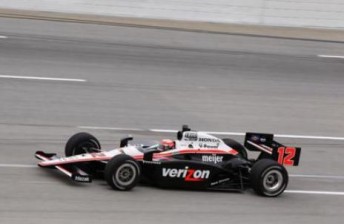 Power will start from pole once again

Will Power has taken his eighth pole position of the 2011 Izod IndyCar season at Kentucky Speedway, equalling the all-time record for most poles in a season.

The Australian heads into tomorrow’s penultimate race with a 12 point lead over Dario Franchitti, who will line-up just 11th after struggling for top speed following a pre-qualifying engine change.

Power will be joined on the front-row by Graham Rahal, who managed to transfer his recent strong qualifying form onto the oval layout.

James Hinchcliffe qualified an outstanding third fastest, while Ed Carpenter and JR Hildebrand round out the top five.

Indianapolis 500 Dan Wheldon winner will make his second start of the season from the back fow of the grid after his car failed to pass pre-qualifying scrutineering.