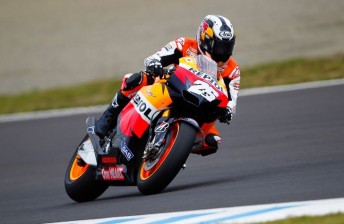 Dani Pedrosa has taken his first Japanese Grand Prix victory, one year after breaking his collarbone at the Motegi circuit.

Pedrosa ran third behind team-mates Casey Stoner and Andrea Dovizioso in the early laps, but found himself at the front of the field by Lap 5 thanks to an off from Stoner and a jump-start penalty for Dovizioso.

The Spaniard then eased away from Yamaha rival Jorge Lorenzo to win by 7.3s.

Stoner, who had dropped to seventh position thanks to a trip through the gravel trap at the descriptively named 90 Degree Corner, recovered to finish third – ensuring the Australian will head to Phillip Island’s penultimate round in two weeks time with a 40 point championship lead.

Marco Simoncelli despite having to serve a jump-start penalty of his own, while Dovizioso – who opted for a soft compound rear tyre – rounded out the top five after being passed by his Italian rival in the closing stages.

Another to drag a strong result from a difficult afternoon was Ben Spies. The factory Yamaha rider recovered to finish sixth despite dropping to the tail of the field on the opening lap after contact with Valentino Rossi.

The incident, which saw Spies, Rossi and Lorenzo enter Turn 2 three abreast, marked the end of Rossi’s race – the first non-points result for the Italian in 25 races.

Nicky Hayden was seventh after a mid-race off of his own cost any chance of a podium, while Colin Edwards, Hiroshi Aoyama and Cal Crutchlow (the third rider to receive a jump-start penalty) filled eighth through 10th.

Hector Barbera, Damian Cudlin, Alvaro Bautista and Toni Ellias all crashed out of the race in separate incidents, with Bautista doing so while running a surprise third.

Cudlin was 14th position when he lost control of his Pramac Ducati at the V Corner on Lap 14 – ending the Australian’s debut MotoGP race.