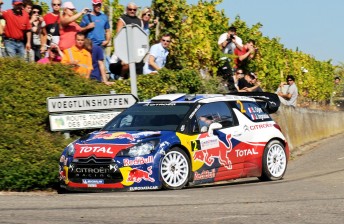 Sebastien Ogier in the box seat in France

Rallye de France Alsace is set for a thrilling final-day showdown with the top two drivers, Sebastien Ogier and Dani Sordo, separated by less than 10 seconds heading into the final six stages.

Sordo began day two leading by one second in his Mini John Cooper Works WRC but was unable to halt Ogier’s charge on Saturday afternoon as the factory Citroen DS3 WRC driver went fastest on four stages to open up an advantage of 9.5 seconds.

“The lead is still not comfortable so we will have to drive well until the end,” said Ogier.

“I will clean the road a bit in the morning because there is some gravel but if it’s foggy like it has been on all the mornings then it can be difficult for everybody and maybe a small advantage for me [because of the dust].”

Sordo, who was quickest on stage 12, has vowed to maintain his push for an unlikely victory for the emerging Mini team, which is contesting only its fourth WRC event.

“We are so close so we will see tomorrow,” said Sordo.

“It’s a short day but difficult because we have some gravel and there could be some dust. I will still push for the win because we have nothing to lose. We did a big push today but it was not enough at the end but we try to continue like that.”

Petter Solberg was leading when a puncture slowed his privateer Citroen on Saturday morning’s third stage. Undeterred he has continued to set a succession of top three stage times. However he is 51.9s adrift of top spot in third overall.

“The pace has been great and that is fantastic,” said the Norwegian.

“There was some damage after the puncture because there was some rubber in the damper so I am pleased I came through. We will see what can happen tomorrow.”

Jari-Matti Latvala completed day two as the leading Ford driver in fourth overall but with fifth-placed team-mate Mikko Hirvonen desperate for points to boost his title chances, the Finns are likely to swap places on Sunday.

While Latvala went fastest outright on stage 16, neither Ford driver has been able to progress as they would have liked following their respective delays on Friday. However, they stand to score a stack of manufacturers’ championship points providing they stay on the road.

“We’ve ended up with the best result we could have expected after yesterday and with no real issues,” said Ford boss Malcolm Wilson.

Kris Meeke had held fourth spot until he crashed heavily on stage 13, thankfully without injury to neither he nor co-driver Paul Nagle. Evgeny Novikov and Daniel Oliveira also suffered crashes.

Sunday’s action will be contested over six stages, including the 4.20-kilometre Haguenau Power Stage through the streets of Sebastien Loeb’s hometown. Unfortunately for the thousands of fans watching the action they won’t able to cheer on their hero through the test after an engine problem forced his retirement on day one.

Leaderboard at the end of Leg 2