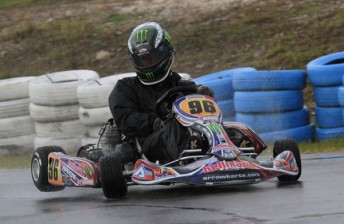 David Sera on his way to victory in Leopard Light at Newcastle. Pic: quickpixels.com.au

David Sera and Matthew Wall showed why they are considered two of the All-time Greats in Australian karting with both claiming dual victories in the New South Wales State Championships at Newcastle today.

With torrential rain soaking the Mount Sugarloaf circuit overnight and throughout the day, conditions were extremely tough on the competitors with the most talented drivers rising to the top.

“The conditions were very tough out there.  I had the speed in the dry in both classes, so it was a bit disappointing to see the weather come in the way that it did but I was able to adapt the best,” said Sera.

“Newcastle is a very technical circuit, there is a big variety in the corners and it is a very demanding track but it is one that I really enjoy.”

For Wall, today’s victories were the third and fourth state championships that he’s secured in 2011.

“I woke up this morning and wasn’t too happy to see it raining, I’ve been struggling a bit with my set-up in the rain lately but luckily I found some pace when it mattered most,” said Wall.

“The team at Arrow Karts and Anthony Bartolo of J&A Tuning have done a great job again this weekend and without them these two wins wouldn’t have been possible.” 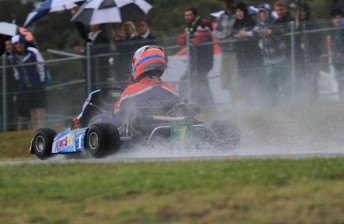 Sera and Wall will go head-to-head in the battle for the Pro Gearbox (KZ2) championship, which will be decided at the Mount Sugarloaf circuit in two weeks time (October 15/16) during the final round of the CIK Stars of Karting Series.

In the junior categories it was Damon Strongman who was victorious in Junior National Light ahead of a hard charging Michael Saller, who went one better in the Junior National Heavy category.

In the youngest class of the weekend, Rookies, it was Isaac Vaccarella who won his first state championship ahead of Jayden Ojeda and Cody Gillis.