Mini leads – Loeb out in France

Mini leads – Loeb out in France 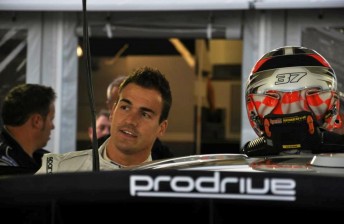 Mini, who is only contesting a partial schedule this year ahead of full assault in 2012, finished the opening day with three cars in top seven. Sordo heads a tight top of the leaderboard with 2.8 seconds covering the top three drivers after the opening eight stages south of Strasbourg.

Loeb stopped on just the third stage of the event with engine failure and Citroen officials confirmed his event is over and will not be restarting on day two of his home rally.

Spain’s Sordo posted several rapid stage times in his John Cooper Works WRC during the morning loop before he shared the joint fastest time with Petter Solberg (Citroen) on stage six. He then went quickest of all on Friday’s final test to take a lead of just one second over Solberg heading into day two.

“We have been working so hard for this and now we’re in a good place. There are still two days [to go] but today has been really good.

“To be leading Citroen at home is very nice but it’s only one day at the moment. I try to be flat again tomorrow.” 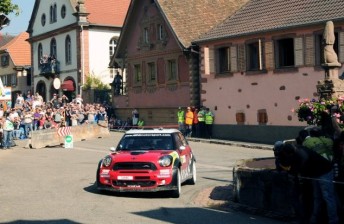 Sordo is one of three Minis in the top Seven

Solberg, in a privateer DS3 WRC, moved in front when he edged out factory Citroen driver Sebastien Ogier on stage seven. Despite slipping behind Sordo on stage eight, the Norwegian said he was delighted with his speed on Friday.

“It’s been absolutely fantastic today and I’m so happy to be fighting properly,” said Solberg.

“I’m second just behind Sordo, it’s a perfect situation for me. But it’s been tough and the last stage I didn’t want to take any risks in the gravel after having five punctures in Germany.”

Ogier said his team would be carrying out a thorough inspection of his car after he reported a possible engine fault on Friday afternoon’s stages. The Frenchman, who has been fastest on three runs, is 2.8s adrift of Sordo overnight in third position.

“It’s not as good as we expected,” said Ogier.

“It’s a strange feeling with the performance of the car. In some places I try but I do not have the speed so the team has to check everything to see what happened. It’s very close and it’s still possible.”

Behind Kris Meeke in the second factory Mini, Jari-Matti Latvala is the leading Ford driver in fifth overall. However, the Finn is more than one minute shy of the lead following on off-road moment on stage three.

Team-mate Mikko Hirvonen, who is 15 points behind Loeb in the title battle, also hit trouble on the same stage when he went off and damaged the steering of his Fiesta RS WRC. He’s 6.9s behind Latvala at the overnight halt in sixth position, having dropped behind his countryman on stage seven.

Dutchman Dennis Kuipers is ninth for the FERM Power Tools World Rally Team with Henning Solberg10th in his M-Sport Stobart Fiesta. Monster World Rally Team’s Ken Block had been in the top 10 until he lost time when Peter van Merksteijn Jr his Citroen and momentarily blocked the road on stage six. The Gymkhana FOUR star is in 13th behind Russian Evgeny Novikov and Super 2000 World Rally Championship leader Ott Tanak. Pierre Campana is 14th in his Equipe de France FFSA Mini.

Ex-Formula One world champion Kimi Raikkonen had been in the top 10 until a freak collision with Henning Solberg on the road section heading to stage three put him out. Although his Citroen suffered only light damage he elected not to continue on day two.

Leaderboard at the end of Leg 1