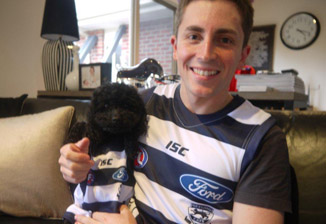 Footy fever hits Australia this weekend, with both the AFL and the NRL contesting their ‘Bathurst 1000s’ today and tomorrow respectively.

While motor racing is more often than not a life-consuming occupation and passion, for most of the V8 Supercars fraternity, there’s always time for footy talk during the season.

For three V8 drivers, and all of the Kiwis, there’ll be some nervous bodies in the crowd or on the couch, cheering their teams on this weekend.

In the AFL Grand Final, Collingwood takes on Geelong in a top of the table final.

Team BOC’s Jason Bright will be at the Melbourne Cricket Ground as a guest of team sponsor Lockwood. Bright, a Collingwood Football Club supporter, hopes he will see his team win a second-consecutive premiership.

“If they can play like they have been for most the year, I’m sure we can go back-to-back,” Bright told Speedcafe.com. “Their form in the last couple of games have had me worried, but grand final day is a unique day and anything can happen.”

In the Geelong Cat’s corner is Tony D’Alberto. A lifetime fan of the Geelong Football Club, the Wilson Security Racing Ford driver is hoping that the Cats will tear the feathers off the Magpies.

“Geelong has come into good form at the right time of the year,” he told Speedcafe.com.

“These two teams have been the best all year and it should be very close, especially with the wet weather, but I think the Cats are going to be too good on the day.”

In the NRL, Sydney’s most hated team the Manly Sea Eagles take on the New Zealand Warriors, or as The Daily Telegraph referred to the NZ team as the ‘Sydney Warriors.’

Sydney V8 driver Michael Caruso is a Sea Eagles fan and says he will be sitting close to his TV, cheering on his northern suburbs team.

“I think having Glenn Stewart and Darcy Lussick back fills a big hole,” Caruso says.

“Manly did a great job to win last week, but having them back will be nothing but an improvement.

“We’ve played the Warriors this year and beat them, but this is finals football. The Warriors out-played Melbourne Storm, and no one expected that.

“I’ll be sitting in front of the TV, yelling at it for a Manly win.”

If you like Rugby League and you don’t support Manly, you’ll be cheering for the Warriors. But it’s funny how things work out – all of New Zealand is currently in the midst of Rugby World Cup fever and the country is pleading for the All Blacks to break their long World Cup drought.

Could a Warriors premiership take the shine off New Zealand’s Rugby push? Or will the country be so upset at losing its V8 Supercars event that its football codes will crumble?

CLICK HERE for Speedcafe.com’s story on the demise of the Hamilton, NZ, street race.