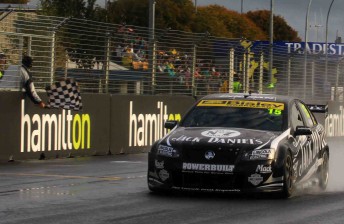 Next year’s V8 Supercars Hamilton street race will be the last after the Hamilton City Council and V8 Supercars have announced the early termination of their agreement.

The termination means that the annual ITM400 Hamilton V8 Supercars street race, held in New Zealand since 2008, will see its last race in April 2012.

Following the financial demise of the previous promoter last year, V8 Supercars stepped in to save the event and took on the associated financial risk in staging an event that costs several million dollars annually to run.

Unfortunately, the 2011 race was impacted by the Canterbury earthquake, Rugby World Cup and economic downturn. Attendance and corporate sponsorship fell below expectations and the event returned a significant loss to V8 Supercars.

In addition, V8 Supercars expressed preference for a November race date, however, HCC advised that November would not suit Frankton businesses and is outside of school holidays yet very close to Christmas. Moving the race would also require a lengthy and costly resource consent process.

HCC and V8 Supercars have been discussing the event’s outlook for some time and are disappointed that in spite of their combined efforts to find a way forward, future races held in Hamilton are likely to remain unviable and result in no return to HCC.

In that evaluation, ongoing challenges – including Hamilton’s distance from a major corporate centre, modest hotel infrastructure and the downturn of ticket sales in the Waikato region – have also been taken into account.

A one-off NZ$1.25 million payment will be made by V8 Supercars to HCC, recognising the early ending of the contract.

V8 Supercars has released HCC from its annual financial commitment after the 2012 race and V8 Supercars will continue to absorb any losses from the Hamilton event.

V8 Supercars will also assume responsibility for the race-related infrastructure.

Hamilton Mayor Julie Hardaker says terminating the contract was the only way forward for the two parties.

“This is the best outcome for both the city and V8 Supercars,” she said.

“While I am sorry to see such a high profile event go, there has been a cost to the ratepayers which is not sustainable. We’ve reached an agreement with the promoters that is the best for the city.”

“V8 Supercars has been completely transparent and collaborative in working with council in attempts to find ways forward,” he said.

“Contrary to some media reports, V8 Supercars in no way blindsided council.”

V8 Supercars Chairman Tony Cochrane said that work will begin soon to find a new home for V8s in New Zealand beyond 2012.

“We have loved our time in Hamilton and are looking forward to staging the 2012 race as planned,” Cochrane said.

“A street circuit is expensive to create, with race infrastructure unique to each venue, and requires considerable corporate sponsorship to achieve. Despite our best efforts, in the current market we could not secure the corporate support we had budgeted for Hamilton.

“The 2012 event will be our last in the Waikato and while we assure fans we will do everything possible to find a new venue, unfortunately we cannot guarantee racing in New Zealand after 2012.”