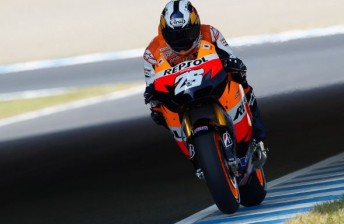 Dani Pedrosa on his way to the fastest time

Repsol Honda trio Dani Pedrosa, Casey Stoner and Andrea Dovizioso have topped the times at the end of the opening day of practice in Motegi.

Pedrosa’s best time of 1:46.79s proved 0.05s quicker than Stoner’s late flyer, after the Australian had topped Practice 1 earlier in the day.

Dovizioso was a further 0.11s back in third, while the San Carlo Gresini Honda entry of Marco Simoncelli rounded out the top four.

Jorge Lorenzo and Nicky Hayden flew the flag for Yamaha and Ducati respectively in fifth and sixth positions, albeit over 0.5s adrift of Pedrosa.

Local Kousuke Akiyoshi was the quickest of the riders making a one-off appearance in Japan, while Australian MotoGP debutant Damian Cudlin was a full 4.56s adrift of Pedrosa’s benchmark, despite improving his own time by more than two seconds from Practice 1.