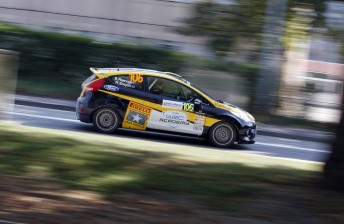 Australia’s Brendan Reeves has put a line in the sand for this weekend’s WRC Academy at the World Rally Championship Rallye de France Alsace, setting the fastest time in the official pre-event shakedown.

Reeves, who sits third in the standings, set the benchmark time in a field of 17 entries in the WRC Academy that also includes fellow Australian Molly Taylor outside Strasbourg.

“We were the quickest in WRC Academy shakedown today,” said Reeves on Twitter.

“The stages are totally different, but it’s a good start.”

The WRC Academy will contest the opening two days of the rally which will be held on closed road tarmac stages.

“We will do these twice each in the rally. Stage 3 is the longest at 36 kilometres in total. 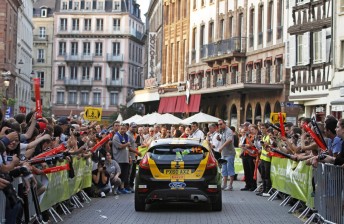 Taylor was met by thousands of fans at the ceremonial start

“Day two has some crazy stages. There is a lot of steep up and down hill sections and some rough and very smooth parts.”

All crews from the World Rally Championship were met by thousands of spectators during the ceremonial start.

“Met a few fans along the way!”

Prior to the start all WRC Academy crews were involved in briefing sessions which included guest speakers Ken Rees and Dani Sordo. Rees worked with the late Colin McRae as part of his reconnaissance team, while Sordo spoke about his impressive career as a driver for Citroen and now Mini.