Lowndes back in – Dakar legend out of Safari

Lowndes back in – Dakar legend out of Safari 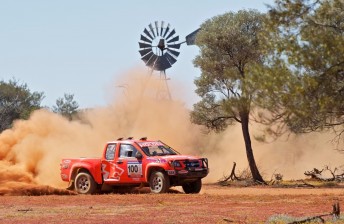 Craig Lowndes back on the gas at the Safari

The Australasian Safari continues to live up to its reputation as the Asia Pacific’s toughest motorsport event with Craig Lowndes fighting his way back up the leaderboard, while two time Dakar champion Cyril Despres has been forced to withdraw because of injury.

After crashing on Leg 5, Lowndes and John Panozzo won both of the day’s stages to climb to fourth outright and within sight of third place. Frenchman Despres is out of the moto division race after injuring his foot on the leg’s opening stage, understood to be tissue damage after connecting with a fence post.

The course west of Leonora took competitors in and around old mine sites and salt lakes and areas damaged by water erosion for 377 competitive kilometres. Some of the tracks had not been used for several years along with rough, rocky and overgrown sections and finishing in deep sand and a final fast section.

Despite being handed over four hours in time penalties, Lowndes picked-up where he left off prior to his accident and easily won both of the day’s stages.

“We went really well today, the navigation was challenging and the car’s going well after last night’s repairs,” said Lowndes.

Steve Riley and John Doble are now the likely contenders for the trophy, leading the autos by just shy of two hours.

“It was a bloody hard day today, rough from the word go and I was over it,” Riley said.

“I just tried to conserve everything, it didn’t matter how slow we went, and we still got big hits.

“The roof air vent got ripped off so it got really hot in the car – not comfortable.

“The race is mine to lose, we just want to get the car and ourselves home in one piece.”

John Pursehouse and David McShane have moved into second position after a strong day in their Mitsubishi Triton.

Terry Conner and Jodi Conner have lost their second position placing due to mechanical failure in the first stage today.

This moves WA pair Adrian Dilallo and Rob Masi in their Mitsubishi Evo Pajero to third at the end of today.

Shane Diener continued his strong form winning both stages but is sixth overall following a mechanical failure on the previous leg.

Sticking with his game plan is moto leader Todd Smith who has continued to hold a strong lead since the end of Leg 1, now 13 minutes ahead.

Both Todd Smith and brother Jacob are riding steadily and both said they were avoiding risks.

“It was a tough day. The track was tight and overgrown, it was rocky and on some parts there was no track to follow. It’s better for me to go fast, because if I go slowly my concentration lapses. All I have to do tomorrow is look after the bike and see it home,” said Todd Smith.

Jacob Smith is ahead by almost 40 minutes to nearest rival Rod Faggotter, who has held on despite riding with a broken hand.

Ben Williams, a privateer rider – meaning he services the bike himself without the help of mechanics – is performing exceptionally well in his first Safari, placing fifth fastest.

Sweden’s Annie Seel who is Safari’s only female moto competitor is the leading international entrant in 15th.

In the Quads, Colin Lawson won both stages, an impressive 15 minutes ahead of leader John Maragozidis who has an overall four-hour lead.

“It was a game of survival and pick your way through. I had three flat tyres to deal with in the first and my exhaust broke off in the second,” said Maragozidis.

“The track opened up after the midday service, and I really enjoyed it.

Leg 7
Friday is the final leg of Australasian Safari, taking off from Leonora to Kalgoorlie and finishing with the final section at the new Kalgoorlie Golf Course and the finish line. The day has four timed sections totalling 207 competitive kilometres.

Video wrap of the day