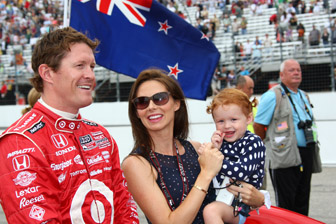 Kiwi IndyCar star Scott Dixon has spoken for the first time publicly about the premature birth of his second daughter and his withdrawal from this year’s Armor All Gold Coast 600 on the streets of Surfers Paradise from October 21-23.

At this stage Tilly is expected to be in care for at least another two weeks, leaving Dixon with no other alternative than to withdraw from his drive with Stone Brothers Racing this week – his seat being taken by European veteran Emanuele Pirro alongside regular driver Shane van Gisbergen.

The Dixons have been making daily trips to the hospital with their two year-old daughter Poppy.

“The toughest part is that everything is going along fine and then this puts you on the back foot,” Dixon told Speedcafe.com.

“When you head to hospital you just naturally think that you will be heading home with your baby.

“She is making progress, but it’s a bit of a fight for her.

“It has been a drain on everyone, but we are looking forward to bringing her home.”

Dixon and his family was due to have Christmas in New Zealand this year, but Tilly’s condition means they won’t be able to fly for several months.

The two-time Indycar champion and former Indy 500 winner was set to join SBR and van Gisbergen in what was being dubbed as a New Zealand ‘Super Team’.

Dixon drove on the Gold Coast last year in a Jack Daniel’s Commodore with Todd Kelly.

“I was really looking forward to this year with a slightly different format and everything,” said Dixon.

“Last year was so much fun. It was different and interesting and a great success.

“I guess this year was going to be cool because racing with Ross and Jimmy Stone and Shane (van Gisbergen) was going to give the whole deal a real Kiwi feel.

Dixon said the drivers who had the chance to drive a V8 Supercar at Surfers Paradise last year would had a definite head start over those drivers racing the cars at the track for the first time.

“I think guys like (Ryan) Briscoe and (Will) Power will have an advantage simply because of the miles they have done in a Supercar,” said Dixon.

Dixon made special mention of his mate and two-time Indy 500 winner Dan Wheldon, who will be making his V8 Supercar debut with the Holden Racing Team.

“There was always a question mark over whether I could run with the Stone Brothers because of the pregnancy and I had tagged Dan as a back-up,” said Dixon.

“In the meantime, Dario Franchitti had to withdraw from HRT and Dan got a ride.

“He and James (Courtney) know each other well, which will be a start.

“It will be important for him to get as many laps as possible at the mid-week test.

“The V8 Supercar is a tricky thing to drive and the Surfers Paradise track is tough enough to race on in a car you know well, let alone a car like that you are racing for the first time.

“I am looking forward to watching both Bathurst the Gold Coast races live on Speed here in the US – that’s a pretty big deal for the category over here.”

Dixon will drive his Target Chip Ganassi entry in this weekend’s penultimate round of the IndyCar series in Kentucky.