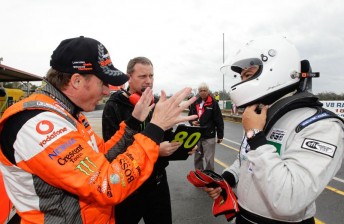 V8 Supercars invited the Manila born 29-year-old to Australia for the test, and is currently in negotiations with the Filipino government for the country to hold a V8 Supercars Championship race.

“I think from our international perspective its vitally important that in all the countries that we are going to go to, whether it’s the United States or the Middle East or the Philippines or wherever else it is we may choose to go in the future, its vitally important that as part of the strategy of going and racing those countries that we develop not only the business and tourism networks but also the driver development potential,” Whitaker told Speedcafe.com.

“There will be a lot of young drivers in all of those countries who love to go racing, and if we can get one or two from each of those nations involved in V8 Supercars, whether it’s a development series level or in a second driver program or in the main game in the future, that would obviously achieve the objective.”

CLICK HERE for a Q&A with Martin Whitaker, discussing Pastor’s test with TeamVodafone and the potential V8 Supercars race in the Philippines.