Filipino driver Enzo Pastor had his first V8 Supercar laps at Queensland Raceway today ahead of a possible drive in the 2012 Fujitsu V8 Supercars Series.

Speedcafe.com’s Stefan Bartholomaeus spoke with the 29-year-old about the experience.

SPEEDCAFE: Enzo, it’s been a big day for you at Queensland Raceway. The team has been impressed by your efforts – how did you find it?

ENZO PASTOR: It was my first time with the car and at this track, and being wet, I was a bit put off by the puddles to start with! After two or three laps I started to bring my times down and get comfortable in the wet. They called me in, and then luckily the track dried out so we could put slicks on and go faster again.

The team was very encouraging all through the day. We made a few mistakes under braking. With these cars, especially in the wet, you barely feel the brakes working. So braking for me was definitely the main issue, but everything else I felt I handled pretty well. My foot pretty much adjusted to putting the power down, so all went well.

SPEEDCAFE: How did the car compare to what you’ve driven in the past, particularly the RACECAR Euro Series car you drove recently?

PASTOR: Mostly I’ve driven front-wheel and all-wheel-drive cars. My first time with a rear-wheel-drive was the Euro car, which was also in the wet. I did pretty well that weekend, I got the second quickest time on my first weekend in the car, so that was certainly a good entry point before getting into one of these V8 Supercars. 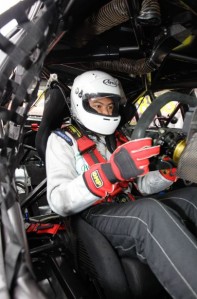 Pastor preparing to hit the track

SPEEDCAFE: Tell us about how the test with TeamVodafone came about through V8 Supercars.

PASTOR: V8 Supercars got in contact with me, because they are going to be hosting a race in the Philippines, and they thought it would be a good thing to have a Filipino driver running in 2013. They thought if they could develop a driver and get them used to the cars, then hopefully by that time they’d be a front-runner.

SPEEDCAFE: Racing at that event is an obvious target, but would you like to race here full-time eventually?

PASTOR: Yes, we’re looking into running the Fujitsu Series next year to build me up for the main race.

SPEEDCAFE: You’ve spent the day with what is our sport’s premier team, TeamVodafone. Having guys like Mark Skaife and (engineer) John Russell on hand must have been a real benefit.

PASTOR: Of course. They were very helpful with all of my questions on how to drive and how the car handles. It really was a dream day for me. For them to tell me after the day was finished that I did pretty well is certainly very encouraging.

SPEEDCAFE: The prospect of V8 Supercars heading to the Philippines is exciting for you obviously, but it should be a boost for the entire motorsport industry in your country.

PASTOR: The Philippines isn’t a very advanced country in terms of motorsport, so us having racing of this level would be a great thing. We’ve had Formula 3 before, and we’ve always had good drivers, but they were just never developed properly. With this, we have a chance of making our mark again. Really since the 60s, when Arsenio Laurel won Macau (1962 and 1963, when the Grand Prix was run to Formula Libre regulations), we’ve never been on top in motorsports.

SPEEDCAFE: What are your plans for the near future? Are you heading straight home now or are you hanging around for Bathurst?

PASTOR: I’d love to stay, but I am flying back at midnight tonight. I have an event back home on Saturday – I organise my own Time Attack and wheel-to-wheel race series as well.

Basically I run an eight-leg event throughout the year. In the past few years racing has kind of died down in the Philippines, so I’m trying to bring more guys back to the track. I get 70 to 80 drivers participating in my events, so that’s certainly a good sign. For me, I will be running the CTM Cup at Macau this November – that is my only driving commitment for the rest of the season.